Published in the November 2015 issue of Missouri Conservationist Magazine. For the original publication (PDF), including my art direction for the article, click here.

Missouri offers a bountiful harvest of wild and native edibles, so from hors d’oeuvres to desserts, your Thanksgiving table can be filled with delicious, locally harvested dishes.

Start your meal with an appetizer from Missouri’s aquatic fare.

Historians generally agree that the first Thanksgiving meal along the rocky shores of Massachusetts included a crustacean, the lobster. While Missouri has neither seaside nor lobsters, it is home to crayfish (also known as crawfish or crawdads). In fact, the Show-Me State boasts 36 species of the crustacean, seven of which are only found here. To learn more about the regulations for taking crayfish, visit the live bait section of on.mo.gov/1Z4mPRw.

If fish is more your style, Missouri is known for its prevalent bodies of water — rivers, lakes, and streams — and superb fishing. Catfish is one of the state’s most delicious and readily available fish. Channel catfish (Ictalurus punctatus) are the most common because they inhabit public and private bodies of water and will take many kinds of bait. Blue catfish (Ictalurus furcatus), however, are limited to larger rivers, lakes, and reservoirs, and are more particular about their food. They are also considerably larger. For more information on fishing regulations, visit on.mo.gov/1Z4mPRw.

Catfish in mini phyllo (flaky dough) cups are a delicious start to your meal. To remove any “fishy” flavor, soak the fillets in buttermilk for up to an hour. Then poach the catfish with sautéed onion, celery, and bell pepper. Add seasoning, heavy cream, and cheese, and simmer for 10 minutes. Fill the cups with the mixture and bake at 400 degrees for about 15 minutes.

A big Thanksgiving meal requires an equally big entrée. Most people think of turkey as the traditional Thanksgiving showstopper, but Missouri is home to other game that may make you rethink your holiday meal.

Missouri has wild turkeys (Meleagris gallopavo) throughout the state. Wild turkeys are smaller than domestic turkeys found in your grocer’s freezer and tend to be drier, due to lower body fat, with a richer, stronger flavor. For recipes and cooking tips to make the perfect wild bird, visit on.mo.gov/1Oaaul0.

There are two legal times of year to hunt turkeys in Missouri — spring and autumn. Both require permits and have specific regulations. Visit the Department’s website at on.mo.gov/1KnFUJU for more information.

If waterfowl sounds like the perfect Thanksgiving centerpiece, Missouri offers a variety of ducks and geese that are migrating through this time of year.

Hunting season dates vary by geographic location and run from October through January. Permits and stamps are required. Visit the Department’s website at on.mo.gov/1KnFUJU for more information.

White-tailed deer (Odocoileus virginianus) are found statewide. Venison is a low-fat, versatile meat with a slightly sweet flavor. Although medallions are the easiest cut to work with, a venison loin roast will feed your entire gathering. Roast it with garlic, juniper berries, and rosemary, or substitute it in any of your favorite beef recipes, keeping in mind that lean meats dry out quicker.

Deer season runs from September through January, and permits are required. More information is available at on.mo.gov/1KnFUJU.

While the entrée may be the showstopper, the perfect side dish can really set it off.

Whether you call it stuffing or dressing, it’s one of the quintessential sides for any modern Thanksgiving meal. While every family has its own recipe, mushrooms, especially chanterelles (Cantharellus) and morels (Morchella), make a delicious and nutritious addition and add a hearty, earthy flavor. Plus, they pair perfectly with sage, thyme, and rosemary, the primary herbs in stuffing. Meaty and chewy, chanterelles are prized worldwide as culinary gold. Luckily, they grow in all parts of Missouri, especially in moist woodlands and river bottoms, from spring through autumn.

Although harder to spot and with a shorter harvesting period — late March through early May — morels are the classic foraged mushroom. They are found in the same locations as chanterelles throughout the state.

Both mushroom varieties are best when baked or sautéed. Cook them first and freeze them for easy access all year. They also can be dehydrated and turned into a powder, perfect for soups, gravy, and even seasoning for the turkey. As always, familiarize yourself with the different types of mushrooms to make sure they are edible.

The Department offers a guide to edible mushrooms at on.mo.gov/1khZrJN.

Spicy and slightly bitter, wild mustard greens (Brassicaceae) are a common Southern delight. Their bright yellow flowers flourish on every continent and as far north as the North Pole.

After removing the tough stems of any larger leaves, stew this relative of broccoli and turnips with onion and bacon or ham hock for a smoky flavor, and finish the dish with a splash of apple cider vinegar.

A popular landscaping shrub from Japan, flowering quince is naturalized in Missouri, so you can find it growing wild throughout the state. The yellow-green fruits ripen in October and are too sour to eat raw. Instead, stew them with cranberries, sugar, fresh orange juice, and cinnamon for a homemade cranberry sauce.

Clover is spread widely across the state in fields, meadows, lawns, and most other non-forested lands. Red clover (Trifolium pratense) is the best known of the true clovers and produces bright pink to red to violet flowers, which are best gathered from May through September.

The dried and powdered flowers can be substituted for flour in a bread recipe in a one-to-one ratio. Often called “bee bread,” due to the fact that honeybees love red clover, the loaf is rich and dense with a mildly sweet note.

Muscadines (Vitis rotundifolia Michx) were the first native grapes to be cultivated in the New World, and they can still be found in the wild. Unlike European and other American varieties, muscadines are more resistant to black rot, allowing them to survive throughout the south and into Missouri.

The wild variety of the grapes often remains green even when they mature in late summer to early autumn. They can be eaten raw, but due to their thick skin are more often used to produce wine, juice, and jelly.

Making a batch of sweet-sour muscadine jelly requires only three ingredients — muscadines, pectin, and sugar. To speed up the process, start with muscadine juice.

The Pilgrims didn’t have access to flour, butter, sugar, or ovens, so the first Thanksgiving desserts probably focused on seasonal fruits and nuts. Although they regularly ate pumpkins as a vegetable, they did not turn them into a pie. Fortunately, with modern technology and the proper ingredients, you can turn those wild fruits and nuts into delicious pies, cobblers, and cakes.

Sour yet sweet, blackberries (Rubus spp.) are prevalent throughout the state. The shrubs are commonly found in open areas and fencerows. They produce white blossoms from April through June and juicy, deep purple berries from June through August.

Since blackberries will not keep in the refrigerator from August to Thanksgiving, freeze them in single layers on a baking sheet, and then place them in a zip-top bag to keep in the deep freezer. A homemade blackberry cobbler is a simple, yet delicious ending to any meal, especially when topped with ice cream.

Hickory nuts and pecans (Carya) grow wild throughout the state, except for the northwestern counties. Harvested in the fall, hickory nuts are especially delicious but can be hard to come by if the squirrels get to them first. Pecans ripen in late autumn, and they provide a desirable meaty chew to a pie.

Nuts freeze very well for year-round use. Instead of an all-pecan pecan pie, mix up your nut selection or use all hickory nuts.

Enjoying a wild Thanksgiving doesn’t just have to be about the food. Plenty of Missouri’s wild edibles can be added to your favorite drinks to create a unique taste.

Often relegated to haphazardly topping a dessert as a nonfunctional garnish, mint (Labiatae) sometimes gets a bad reputation as a throw-away green leaf on a sweet dish. Mint can do so much more, and one of the most delicious uses is in ice-cold tea, sweetened or not.

At least 11 species of this herb grow throughout Missouri, with the most dense populations in southern and central Missouri. All varieties bring a fresh coolness to food and drink, and the flavor volume differs by species, with peppermint being the strongest.

Collect mint at its peak in the spring, summer, or fall. If you don’t plan to use it soon, freeze the leaves on a baking sheet and bag them for later. For iced mint tea, simply brew black tea and add mint, allowing time for the mint leaves to steep and release their menthol aroma. Strain, and serve with lemon. If you’re feeling really thankful, add some pineapple juice.

Elderberries (Sambucus canadensis) grow throughout the state and produce fruit that turns purple when ripe in August or September. Muddle the berries with lemons and sugar. Add water, and refrigerate to create elderberry lemonade.

Whether your feast comes from Missouri’s wild, the grocery store, a restaurant, or a combination of all three, Thanksgiving is a time to celebrate the year’s bountiful harvest.

You can purchase Cooking Wild in Missouri at Department nature shops or online at bit.ly/1LKZoWj. 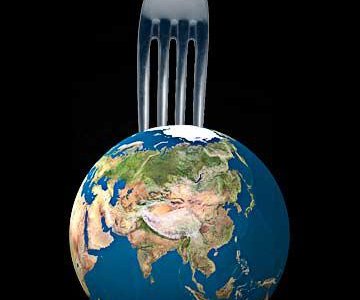